SDF Presidential candidate Osih Joshua has revealed a 24 points manifesto ahead of the October 7, Presidential election. Osih who made public his political manifesto on August 22, 2018 in Douala is quoted to have said that once elected President of the Republic, he will make sure the 24 points are implemented. Here below are the 24 points of Osih Joshua. Barely a month to the campaign launch, prospects as to whether the opposition in Cameroon could come up with a unique candidate continue to diminish. 8 candidates are expected to fall President Paul Biya (incumbent) at the polls come October 7, 2018.  Among other things, Osih says he would close ENAM as soon as he is elected President, increase minimum wage to 160.000 FCFA, ensure that Cameroonians own land given that the laws aren't favourable etc
See 24 Points below 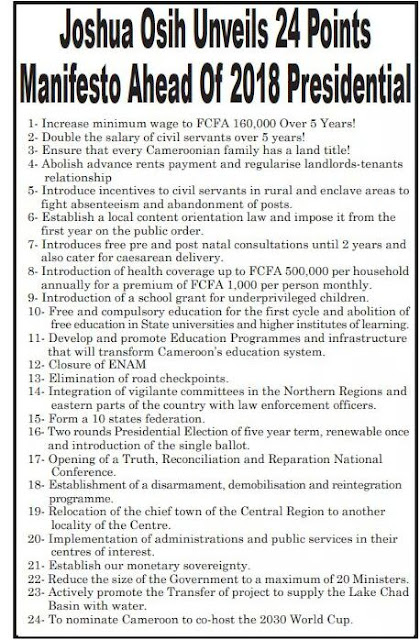 When News Breaks Out, We Break In. (The 2014 Bloggies Finalist)
Posted by cameroonlatest.blogspot.com at 8:07 AM