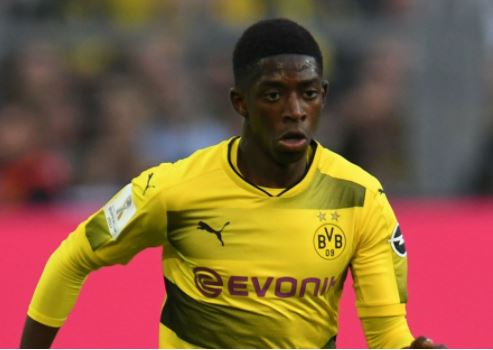 Ousmane Dembele’s representatives are encouraging Arsenal to intensify their efforts to sign the Barcelona star, reports claim.
The Gunners have frequently been linked with the French international, who is reported to be unsettled by Malcom’s Nou Camp arrival.
And Arsenal could pick up the pieces. Spanish radio station Cadena SER are claiming that Dembele’s agents have been in touch.
They report that Dembele, 21, is happy to stick with Barcelona but would happily listen to any offers that arrive before the transfer window closes next week.
In addition to Cadena SER’s claims, Football London say Arsenal transfer chief Sven Mislintat has been in touch.
The 45-year-old knows all about the France international having brokered his move to Borussia Dortmund from Rennes in 2016.
Whether it is enough for lure him to Arsenal, though, remains to be seen.

Lucas Torreira will make his debut on Saturday against Lazio, Gunners boss Unai Emery has revealed. Torreira joined the north London outfit from Sampdoria last month for a fee believed to be in the region of £26million.
"At the moment I am very happy with the players who are with here with us,” Emery said last night when asked if there could be any more new arrivals.
"There are more coming; Nacho Monreal, Lucas [Torreira] and [Granit] Xhaka will start to play some minutes on Saturday."

Aubameyang vs Lacazette
Alexandre Lacazette insists there is no rivalry between him and Pierre-Emerick Aubameyang as they aim to be Arsenal’s lead striker.
Last night, Aubameyang started up front against Chelsea and was replaced by Lacazette in the second half with the Gunners trailing 1-0.
But with virtually the last kick of the game, Lacazette equalised to take the game into a penalty shoot-out.
With Arsenal’s first Premier League game against Manchester City 10 days away, Emery will need to decide which system will get the best from Lacazette and Aubameyang.
But Lacazette says there is no problem between him and Aubameyang and talked up their friendship.
"We know that if we are together, we can stronger and we just have the same target together, which is to win something for the club," Lacazette told Arsenal Player.
"So of course we don't have any problem with each other.”

When News Breaks Out, We Break In. (The 2014 Bloggies Finalist)
Posted by cameroonlatest.blogspot.com at 7:40 PM